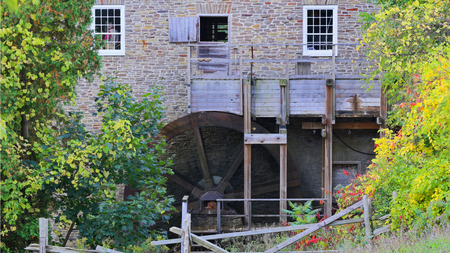 Many lessons can be learned from history; that is true of energy transitions. An energy transition is a long-term structural change in an energy system and Ontario has experienced several over the last two hundred years.

Our first energy sources were local. Early European settlers in Upper Canada relied on a pre-industrial system for their energy. They burned wood to stay warm and to cook their food. The chemical energy stored in plants and animals gave them the strength they needed to survive in the backwoods – to cut wood, build their homes and farm the land – and they harnessed the muscle power of work animals to ease their load. During the 1800s, watermills began to pop up across southern Ontario to exploit the movement of water to grind grain and saw logs.

Elsewhere, the steam engine was beginning to stoke the fires of an industrial revolution. Converting energy from one form to another, the steam engine would also lead Ontario’s first energy transition. Simply, steam engines converted the heat from burning coal into movement through the production of steam.

Early steam engines were highly inefficient; a lot of coal was required to produce enough kinetic energy to be useful. So, early uses were limited to pumping water out of coal mines where coal was both plentiful and close as hand. As engine design became more efficient, they were used in more creative ways. They replaced the sails on ships while steam-powered locomotives revolutionized ground transportation.

By the end of the 1800s, U.S. coal and local steam engines powered most of Ontario’s industrial growth. However, as the century turned, energy security was becoming an increasing concern for local politicians and boards of trade in Ontario. Rising coal prices and frequent shortages were threatening local prosperity. Municipal governments across Ontario began to turn their attention to a new energy technology.

In Canada, the first use of water to produce electricity was at Chaudière Falls in 1881; the electricity was used to power street lights and local mills in Ottawa. Soon after the turn of the century, most electrical systems in Ontario were owned by municipal governments eager for their communities to benefit from this new energy technology. Fourteen Ontario cities formed the “Power for the People” movement and were instrumental in the formation of the Hydro-Electric Power Commission of Ontario. Sir Adam Beck, the commission’s first chairman, was an early champion as the mayor of London, Ontario.

Abundant and cheap Niagara hydroelectric power arrived in Ontario homes for the first time in 1910. The transition from steam power to centralized electricity brought energy security to Ontario communities and they prospered. While the first industrial age had been powered by steam and abundant coal, the second would be powered by centralized electricity and cheap oil and gas. For the next century, our communities could be blissfully unaware of where our energy came from and how it was produced; it simply arrived over wires, through pipes and on trucks.

The first coal-fired thermal-electric power plant was put into service in Ontario in 1951. The generation of electricity from the combustion of a fossil fuel introduced a non-renewable energy source into the electricity system, reducing its efficiency. Modern hydroelectric power stations can convert more than 95 percent of the kinetic energy in a river into electricity. Efficiency cannot be 100 percent as this would mean the flow of water would have to stop. However, modern thermal-electric power plants are only about 60 percent efficient and more conventional plants are less than 40 percent efficient. When coal is burned to produce electricity, as much as two-thirds of the energy is wasted. Of course, the use of fossil fuels to generate electricity was also a significant new source of greenhouse gas emissions which led the Ontario government to convert all coal-fired power plants to natural gas between 2003 and 2014. This big move to fight climate change reduced the greenhouse gas emissions attributed to our electricity system by 87 percent.

Canada's first nuclear-power plant in Rolphton, Ontario began delivering power to the grid in 1962. Today, most of the electricity in Ontario is generated from nuclear energy. The use of this non-renewable energy source has also contributed to the inefficiency of our centralized electricity system, as approximately 60 percent of nuclear energy is also lost as heat. While nuclear power does not contribute to carbon pollution, it does create nuclear waste that must be managed for decades.

Today, a global energy transition is underway to decarbonize the world’s energy systems. Under the Paris climate agreement, greenhouse gas emissions must be reduced to zero by 2050. While climate change is one factor, there are several others driving this modern energy transition: the emergence of cost-competitive distributed-energy-technologies, the convergence of communication and energy technologies, the rapidly declining cost of renewable energy sources like wind and solar, the systemic inefficiency of our current energy system, and concerns about energy security which includes consumer issues of affordability, accessibility and reliability.

Canadian cities influence nearly 60 percent of all energy consumption and over half of the country’s greenhouse gas emissions. This puts them on the front-line of integrating local, renewable and conventional energy sources to affordably, cleanly and efficiently meet their energy needs. One hundred years ago, local leaders took steps to accelerate an energy transition in Ontario. They are doing the same today, as the practice of community energy planning continues to grow and develop across Ontario and Canada. The question is not whether this modern energy transition will occur, but rather will it happen fast enough to head off the worst of climate change.